Start a Wiki
Alasdair Stephan Reigard is a Pokémon trainer. At the beginning of his Pokémon journey, he chose a male Arcanine as his starter and embarked on a journey to become a strong Pokémon trainer. Along the way, he develops an interest in legendary Pokémon and begins conducting personal research on them.

Alasdair is about five feet and ten inches tall, with a somewhat muscular build and thick black hair. His hair is very wild and he usually doesn't bother trying to tame it. He is a bit stoic and doesn't smile often around people, but may around Pokémon.

As previously stated, Alasdair is a bit of a stoic, finding it energy-consuming to interact with people but having an easy time with Pokémon. He connects strongly to his Pokémon and seems to have a fair understanding of what they're saying. Per his social isolation, his weakness can sometimes be in working with others, as he is very independent and somewhat solemn.

To be added to, bro.

To be added to.

Alasdair is set to appear in a Poké Wars story by Dark Seeker Kotsu, along with his starter, Vulkan. 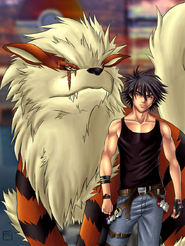 Alasdair and his starter, Vulkan. 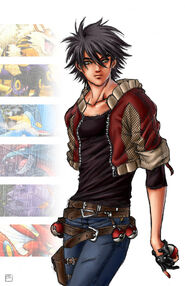 Alasdair (with images displaying some of his Pokémon)
Add a photo to this gallery
Retrieved from "https://zcrushersstrikeforce.fandom.com/wiki/Alasdair_Reigard?oldid=18379"
Community content is available under CC-BY-SA unless otherwise noted.