DJ is a member of the Z Crushers Strike Force. He's friends with just about everyone in the group, though he's also the most arrogant of the bunch. He's always causing trouble, but usually comes in handy in a crisis. DJ's a strong fighter with great skill, and is not very serious around his friends though. He's 5'7. He wears just plain normal clothes, and hangs out with Kotsu and LT. Surprisingly, his favorite color is red. His son is Draik.

Theme Song (Too lazy to click the video? Do it anyway.)[]

Cosmic Destruction - A large, red blast that causes huge impact and damage to the opponent

Cosmic Rush - DJ charges towards his opponents and punches them in the face, then appearing behind them with a fierce knee to the back of the head.

Cosmic Flash - DJ fires a giant blue blast from his hand, before charging and kicking the blast into the opponent.

Cosmic Finale - A giant rush were DJ kicks his opponent i.n the face, elbowing them in the gut, and blasting them away.

DJ about to charge the Cosmical Omega Kamehameha 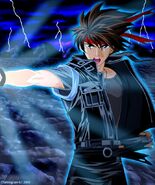