Eden is the young son of Creed and an unnamed female Innes. He is around the same age as Kotsu Reigen's son, Taiza, whom he frequently trains with and has befriended. He is also friends with LT's son, Striker.

Eden has light colored hair and purple colored eyes. He has blue markings on his face. In appearance, he is said to look very much like his father.

In personality, Eden is kinder than his father, though he can still be very much like Creed at times. He is quiet and has a bit of a dark personality, likely do to with him being a member of the Innes race. He is very thoughtful and cunning as well. 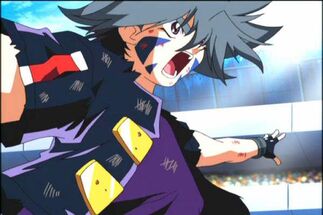 Eden, in the midst of a fight
Add a photo to this gallery
Retrieved from "https://zcrushersstrikeforce.fandom.com/wiki/Eden?oldid=10302"
Community content is available under CC-BY-SA unless otherwise noted.