Ginjo is the dragon of Goku Rao. His egg was given to Goku by Kotsu Reigen after the latter received Ginjo's egg as a gift from the Fangor Dragons' Clan. Ginjo is a familiar with fellow dragons Jakarys and Plater.

Ginjo is a bright green dragon. He is smaller than Jakarys, but bigger than Plater. Gingo's wings and build allow for smoother flight than what large Jakarys can offer. His tail is forked, and he has spines running along his back.

Ginjo is much more mellow than both Jakarys and Plater, but is nevertheless protective of his master. Ginjo also shows desire to protect Goku's family, particularly his two young children. As an infant, Ginjo was especially curious, which often led the small dragon into comical antics. As a young dragon, Ginjo also had an unfortunate habit of burping fire. 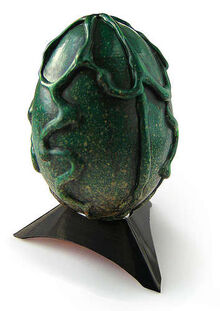 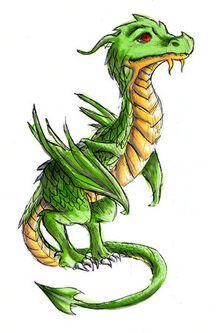 Ginjo as a newborn
Add a photo to this gallery
Retrieved from "https://zcrushersstrikeforce.fandom.com/wiki/Ginjo?oldid=18160"
Community content is available under CC-BY-SA unless otherwise noted.