Goku Rao is one of the first members of the ZCSF and Darku's brother. He is the husband of Hisana Biermann-Rao and the father of Ria and Neishel. He is best friends with LT and Jeff, and he is similarly close to other members. He likes to joke around with everyone especially with his cousin Kotsu, whom he cares about as if Kotsu were his own son. He came to Earth from a distant planet, although he can't remember his past as a kid. He started to wander the Earth as a teenager until he met LT, whom he quickly became friends with. From that point on, he settled down on Earth.

Goku is 5'9 in height. He has black eyes, messy black hair that resembles Goku's and wears a blue training gi.

Goku is always cheerful, to the point where it is rare to see him upset. When he does get upset, he doesn't want to talk to anyone and only wants to be alone. He is also funny and is usually found joking around with his friends. He also spends time training with his brother Darku, and he just likes to live life at its fullest. 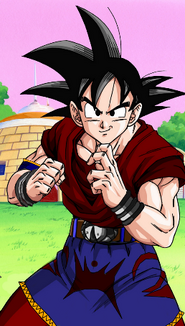 A serious Goku Rao
Add a photo to this gallery
Retrieved from "https://zcrushersstrikeforce.fandom.com/wiki/Goku_Rao?oldid=17946"
Community content is available under CC-BY-SA unless otherwise noted.