Goku Reigen is the secondary protagonist of the I'm Just Saiyan series. He is a young Saiyan who was sent to earth when Frieza attempted to get rid of the Saiyan race.

Goku Reigen has black hair and dark eyes, like Ted. He is of average height for his age. As a five year old he had short hair, but by age ten he let it grow out past his shoulders. He has a muscular build for his age.

Goku is almost always seen playing with his friends especially Goten Saito whom he is best friends with. He is usually found with a happy and positive attitude around everyone especially his family and friends. He can be shy around new people too but once he gets to know them he acts normally. Cocoa being an exception since he always acts all shy around her.

Goku first appears in the prelude when Roshai found the boy in his Saiyan space pod in the middle of the ocean; Goku had only just landed on Earth. He was then taken and was trained by Roshai on how to fight. When Roshai went to see Ted for the first time, Goku waited patiently at home until he came back with the child. It was then that Goku confirmed that Ted was his little cousin.

At the age of ten, Goku accompanies Roshai, Ted, LT, and DJ to the tournament. He only wanted to spectate and told Roshai that he didn't want to participate in the tournament. He witnessed Nat's cold-blooded and tragic murder of Pat and also witnessed Ted kill Nat to prevent him from harming others.

Once back on Kame Island with his friends, Vegito comes and introduces two new girls named Violet and Cocoa to everyone. Goku is sent to talk to Cocoa and show her around the place. Goku spends much of the reunion time with Cocoa, showing her around, which arouses suspicion in LT and Ted. LT tells Ted that it is because Goku "like-likes" Cocoa. 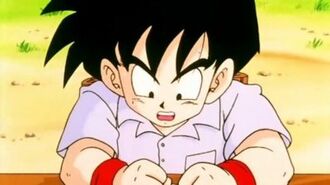 Goku, upon arriving on Earth.
Add a photo to this gallery
Retrieved from "https://zcrushersstrikeforce.fandom.com/wiki/Goku_Reigen?oldid=17485"
Community content is available under CC-BY-SA unless otherwise noted.