Hilbert Hinterher is a young boy, often depicted as a nine year old in most stories. He is good friends with Kotsu.

In a respective series, he plays different but somewhat similar roles. In most cases he is a mysterious young Saiyan boy who will randomly show up and aid Kotsu and his friends in battle. In Dark Seeker Kotsu's story in development, Macht Soldaten, he was found and raised by Kotsu, and was forced to undergo "The Trial." In Blood Brotherhood, Hilbert is the youngest member of the Seven Swords of Legend.

Hilbert is a nine year old boy with brown hair and black eyes. He is small, and of typical appearance for a young boy.

Again he plays the smallest in a group in Blood Brotherhood, where he is the smallest of the Seven Swords of Legend, an elite group of seven swordsman.

Hilbert is a very detached young boy. He is intelligent, quiet and mysterious. He has yet to reveal what it is he is doing when not helping Kotsu at some time. Some people imply that Hilbert may be older than he physically appears to be, but this theory has yet to be proven. In his mannerisms, Hilbert is more adult than he is a child. He prefers reading and learning, as opposed to playing and other activities of that nature.

In Macht Soldaten, Hilbert is shown to have some psychic powers before becoming one of the elite force, which may be attributed to his suggestion that he was "born to join".

In Blood Brotherhood, Hilbert is adept with a sword and unusually acrobatic. He can jump great distances and climb very skillfully. He can also speak to dragons, wolves and other creatures, and has been known to overpower beings twice his size with relative ease.

There are not many particular connections between Hilbert and the song, although his surname, Hinterher, is a German word which is used multiple times in the song. 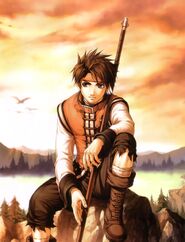 Hilbert, after the first timeskip. 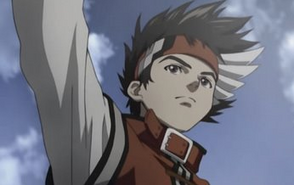 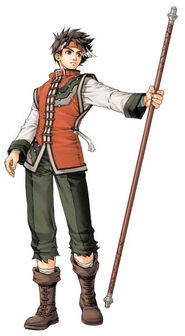 Hilbert Hinterher, after the first timeskip.
Community content is available under CC-BY-SA unless otherwise noted.