Start a Wiki
Inferno is Cocoa's dark side created by Murdoc. She is known for having a secret crush on Creed. Inferno is an unknown race. 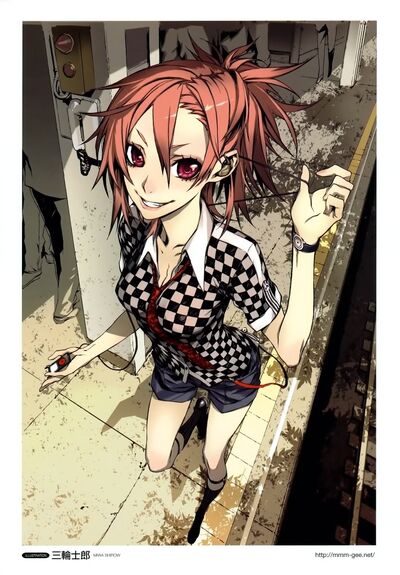 Inferno is very cruel and unforgiving. She talks very eloquently and rarely smirks. Inferno believes in "survival of the fittest" and has little compassion. Inferno is very calm and is often collected. She is very interested in the younger generation. She has an avid hatred of Cocoa and wishes to murder her, but she can't. Inferno is not afraid to kill anyone. She has a hint of insanity, and keeps her sanity well hidden. She doesn't curse and calls profanity; "the language of vagabonds". Inferno has a crush on Creed and keeps it well hidden. However, when one hurts Creed, she loses her cool and hurts all in her sight. She has an odd caring for Creed but she doesn't say it.

Inferno has burgundy-scarlet hair that is usually tied up in a ponytail. Her eyes change color frequently. They are usually pastel red or ceil blue. Occaisonally, they are pistachio green or ash grey. When one threatens or hurts Creed, her eyes widen and go black. She has a grey and black checkered shirt and jean shorts reaching to a few inches below her knee. She has grey and black stockings and black flats.

Retrieved from "https://zcrushersstrikeforce.fandom.com/wiki/Inferno?oldid=8744"
Community content is available under CC-BY-SA unless otherwise noted.