Koakuma has long, blood red hair and eyes. She wears silver armor with shoulder blades, breast plate, arm plates, a red and white dress and a red and pink belt wrapped around it with a heart belt hole. She wears long, thigh-high boots with white cuffs. Koakuma is also a devil, but someone pulled off one of her wings located on her head.

Later on, Bulla had asked Koakuma is she wanted some new armor. She agreed, and gave her some new clothes. Now, she wears a black and white bathing-suit-looking outfit, with a black and red scarf. She has shoulder-length black gloves. She wears a brown tool-belt that actually hold her weapons. She also wears brown, thigh-high boots. She has black and white (with some green) armor. She sometimes wears her hair up in a white bow.

Koakuma (小悪魔 （こあくま）) is a nice 18-year-old girl with a tortured past and a dark voice. As much as she tries to get over it, she always has memories of her past. Other than that, Koakuma is a very calm girl with a sassy attitude. Although, she likes to have friends over for a night or two to keep in touch. Usually Koakuma is found reading numerous novels in her room.

A Rapier is a powerful sword with a killing edge. It's more of a piercing sword then anything else.

The Falchion is Chrom's old sword, which Koakuma found lying around. It's also the last of it's kind. It is a very, very powerful sword.

A glass bow is a rare, thin bow-and-arrow with a sharp edge. Koakuma doesn't use it that often, but it is one of her most favorite weapons.

A killer bow is a powerful weapon that flies through the air like a missile. Koakuma uses this a lot more than the glass version of the weapon.

A simple, thin sword used by many - one of Koakuma's first weapons.

Koakuma's rare sword with a flaming aura. She used this to kill her husband, Chrom.

A powerful, dark magic. Koakuma likes a use this tome very often because it looks neat.

A mildly powered fire magic. It's easy to control but Koakuma doesn't use it unless necessary.

(Before reading this story, all of this goes to it's original owner(s). I don't own anything. Because I couldn't come up with anything.)

Koakuma started out to be a normal, poor village girl, until the Ylisseian's attack. The Ylisseian's killed Koakuma's family, leaving her poor, alone, and staved. Later, Koakuma discovered she could transform into a bat-hybrid and start a new life. She could choose to transform to a bat-hybrid and back to a human as much as she liked, as long as she had her charm with her.

Later on in life, she lost the charm in a river. She has yet to find it. She hopes one day that she will find her charm and go back to being a normal, human, 17-year-old girl.

Before Koakuma and her family had been attacked by the Ylisseians, she got married to a man named Chrom. While battling side-by-side to defeat the leader of the Ylisseians, Validar, Koakuma killed Chrom.

Chrom had thought he has beaten Validar with Koakuma, so he turned around and smile at her. But, Validar was still barley alive. Validar said "THIS ISN'T OVER, I'LL TARE YOU APART!", and shot a huge orb of magical-fire at Koakuma and Chrom. Koakuma pushed Chrom over, so only Koakuma would get hit. It was successful, but Koakuma went into a trans. Chrom managed to kill Validar, and ran over to Koakuma:

"You alright? Heh, that's the end of him." Chrom said, Koakuma looks up to see a dead Validar. "Thanks to you, we carried the day." said Chrom smiling. "We can rest easy now...At long last..." Chrom said. Koakuma's vision turned red, as Chrom begins to panic. "What's wrong?...You okay?! ..KUMA?!?!". The dead Validar was controlling Koakuma's mind, and Koakuma took her sword and stabbed Chrom in his chest. Her vision was restored, but her heart was broken. Chrom wobbled away, holding the sword that is still in his chest. "This is not your...your fault...Promise me you'll get out of this place...please...g-...go..." Chrom said, falling to the ground, as Koakuma ran as fast as she could, into a field, as she knocked out from the smoke.

After 2 solid years of pain and suffering, Koakuma gave up on finding the charm and reviving her dead husband. She began a normal life, excepting who she is now and will forever be. "I have a new purpose.." Koakuma said, as a tear slowly rolled from her cheek, and dripped onto the dew-touched field.

Since that has happened, Koakuma developed a strong relationship with Josh.

One of Koakuma's best friends, and her old collage room-mate. Koakuma and Bulla like to hand out and sometimes call eachother to chit-chat every now and then.

Koakuma chills out with Steve whenever she goes to Bulla's house. Steve and her have an awkward relationship, but Koakuma is good friends with him.

Koakuma admires Josh for his pride and strength. Koakuma used to dislike him, but once she got to know him better, she developed a crush for him, and decided to start dating him.

Koakuma and Malestorm aren't very close, but she still accepts him as a friend. Malestorm and her joke around sometimes and get along well.

Astral and Koakuma don't go back very far at all, but they are pretty good friends. Koakuma likes to call him a "brainiac" because she thinks he's really smart and admires him so.

Nikad and Koakuma don't get along very well, but she sometimes trains with him.

A lonley fellow Koakuma became friends with, as they are both half deman half human.

Koakuma's "son". She doesn't know a lot about him, but she likes to call him Tommy. (Maybe I'll add more later?)

"If you're going to fight with me, you may want to use a more powerful weapon than those."

"Try going to something called 'school'." 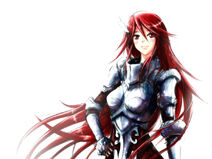 Koakuma introducing herself to the crew 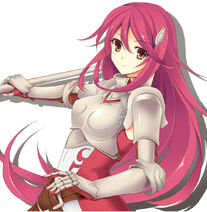 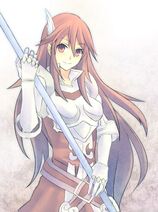 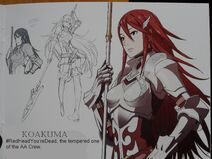 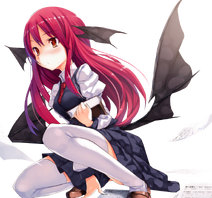 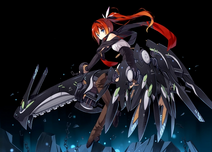 Koakuma in the armor Bulla made her
Add a photo to this gallery
Retrieved from "https://zcrushersstrikeforce.fandom.com/wiki/Koakuma?oldid=16350"
Community content is available under CC-BY-SA unless otherwise noted.