LT was the second member of the Z-Crushers Strike Force (following the leader Kotsu Reigen ). He is known to be pervy and for some reason act like Nigel Thornberry a fictional character from Nickelodeon's The Wild Thornberry's; but when it comes down to serious situations, he changes into a strict and serious person. He has a laid back personality. He is best friends with Ted and with the rest of the members. LT is very inventive being skilled in blacksmithing, engineering, and technology. LT has been possessed by a demon called The Red King since he was a small child. He cannot remember anything from his childhood due to being possessed. After being possessed he was found by the Rao's and raised along with Goku.

LT is a large 205 lbs and 6'10 Ginger male who often wears a pair of ripped up jeans, sunglasses, and a tanktop or hoodie. When fighting LT also is known to wear a fluffy jacket and sometimes a bandana.

Martial Arts - LT uses a mixed style of fighting consisting of Boxing, Kung Fu, Karate, Judo, and of course Bar/Street Fighting. He is known to use anything around him as a weapon if he is losing the fight ranging from cigarettes to pool cues, a sword however being his weapon of choice.

Energy - LT can manipulate an unidentified red energy somewhat similar to fire. He can use this to empower himself and sometimes his weaponry. This energy can also occasionally take the form of fire.

Throne of the Red King

Striker Thompson - Striker is LT's first son who was literally left on his doorstep. LT loves his son, which is why he hasn't told him he is adopted. Striker has learned to fight from his dad using a similar style. Striker also possesses a light blue energy similar to his father's in which he inherited from whoever his real parents are. For more information on Striker check his page.

Braden Thompson - Braden is LT's second son being biological but born to an unknown woman. Once again this child was literally left on his doorstep with a note saying that this one was biological and of course being the softy LT secretly is he took the kid in. Braden became very attached to LT and Striker and it is unknown if Braden possesses any special abilities as he has not yet been taught to fight. For more information on Braden check his page. 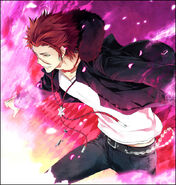 LT about to fight
Community content is available under CC-BY-SA unless otherwise noted.
Advertisement