Start a Wiki
Nikad is 20-years-old. Nikad is the official role-play character of IloveJeice. He's the clone of Goku GT and was created for the sole purpose of protecting the Earth. Nikad is also half saiyan and half human. Nikad also has the power to clone up to 600 clones. He mostly uses these clones to train for a big tournament or just to become closer to a super saiyan.

Nikad is a half-saiyan and the clone of Goku. The reason why he is a half-saiyan is because he isn't all Goku. He is actually potara fusion of 2 saiyans. The original clone of Goku is the original Nikad that's also where Nikad got his name. This guy is one of the people Nikad is made of, the other that makes him a half saiyan is called "The Clone of Trunks." But he will turn into a Super Saiyan soon. He was training for years then he soon met Bulla, Astral, Midori, Lau and Steve. It is a very long process. He also has a crush on Midori. Then he wished to be 2 years older. That made him 16 then 2 years passed in that time Nikad was training. He was 18, then he went inside the hyperbolic time chamber and trained for 2 days, making him 20. TBA 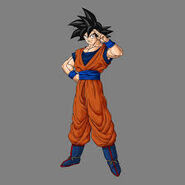 Nikad's Gi
Add a photo to this gallery

He started with 10g on King Kai's planet. It was pretty hard for him. He was only 8 years old. Until he mastered 10g when he was 9. He learned the technique of cloning when he was 14 in 50g. He then mastered 50g. He was training for 4 years. TBA

Retrieved from "https://zcrushersstrikeforce.fandom.com/wiki/Nikad?oldid=16145"
Community content is available under CC-BY-SA unless otherwise noted.