Plater is the dragon of Ralph Reigen, the adopted son of Kotsu Reigen. Plater has become a familiar of Kotsu's own dragon, Jakarys.

Plater is slim and blueish in color. He wears golden armor and has a more serpentine build as opposed to the larger Jakarys. This is due to him being a different breed.

Plater is ruthlessly protective of his master, much like Jakarys is with Kotsu. He also protects the younger adoptive brothers of Ralph with a fiery passion. Overall, Plater is a far more ruthless and cold dragon, and a bit on the bloodthirsty side, though he has remarkable restraint. 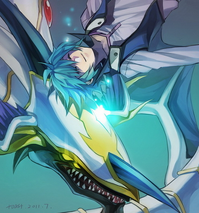 Plater, wearing special white and gold armor, and Ralph Reigen
Add a photo to this gallery
Retrieved from "https://zcrushersstrikeforce.fandom.com/wiki/Plater?oldid=18159"
Community content is available under CC-BY-SA unless otherwise noted.