Pyrus is the dragon of Blaze. Like Ginjo, his egg was obtained from the Fangor Dragons' Clan and was given as a gift to Kotsu Reigen, who then gave Blaze the egg. He is a familiar with fellow dragons such as Jakarys and Plater.

Pyrus is a large red dragon, behind only Jakarys in size, despite being the youngest (having hatched two days after Ginjo did). Pyrus is heavily covered in his scaly armor and he has large white horns, which grew in as he became a juvenile dragon.

Pyrus is passionate about protecting his master as most dragons are. However, Pyrus is the most fiery and hotheaded of the dragons, perhaps this being due to his affiliation with fire. He also tends to shoot fire more often than other dragons, as a means of attacking. He is even capable of shooting individual fireballs, which leads many to believe he is descended from one of the fire dragons, thought to be extinct. 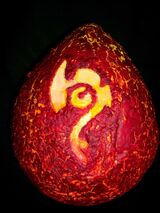 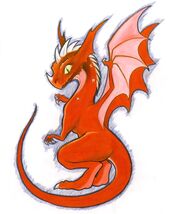 Pyrus as a newborn
Add a photo to this gallery
Retrieved from "https://zcrushersstrikeforce.fandom.com/wiki/Pyrus?oldid=12566"
Community content is available under CC-BY-SA unless otherwise noted.