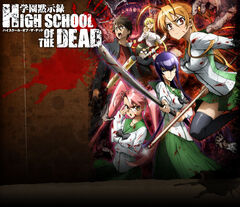 Whoop! Yay, another review, and what is it this time? Yep, its Highschool of the Dead (HOTD) and I must congratulate you on being able to read. On with the synopsis.

Takashi Komuro is a normal high school boy (as are many anime leads), but one day, an infection breaks out that turns people into zombie-like creatures. Along with his friends and the school nurse, he fights his way out and begins a journey to find out what exactly has happened to the world.

See, when I go into an ecchi anime, I usually expect a stupid, with stupidly massive tits, that don't cater to the law of physics and bounce up and down like a bunny at a Skrillex concert. And that's exactly what I got when I watched this show. Is this a bad thing? Yes and no. You see, Highschool of the Dead is a 2010 summer anime, complete with a well-worn story of zombie apocalypses, a never-ending stream of gun violence, and, in between the various battles, scenes that approach pornography, seemingly placed precisely to placate impulsive sexual urges when the desire to see zombies have their heads blown off is exhausted. Despite all that, its freaking fun to watch. And I know what you're thinking. "Josh.... you're such a pervert." and maybe I am but despite all of this Highschool of the Dead is something I'd recommend to the vast majority of people. And here it is, if you don't mind tits, panties, blood, comedy, attractive dude with guns, fat funny guys with guns and zombies, I fully recommend this series to you. 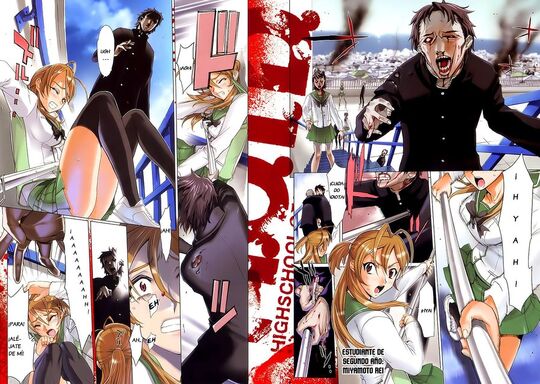 As you've probably heard me say before, the cast of Highschool of the Dead is made of the most stereotypical possible archetypes, and while I felt occasional affection for some of them, it was the kind that will never transcend the series itself, the characters being utterly dull when compared to those from some better-developed series. Not to mention the actions these mofos pull takes away any sense of danger the series could possible have. The show has 7 main characters. 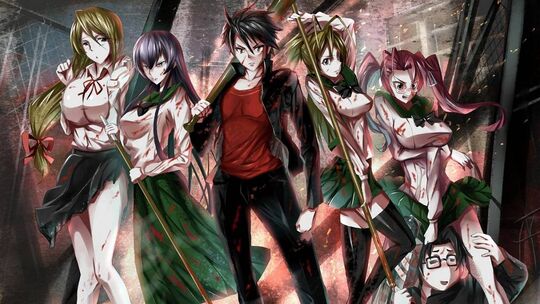 With that being said, the show is very capable of being entertaining on a basic level, with the enjoyment of seeing zombies have their heads blown off trumping my dislike of the main characters and the pacing usually being measured enough to keep the story coherent and fast enough to move it along. There is absolutely nothing new to see here, for the various components of past zombie flicks (the scene where crowds of people desperately scramble to reach restricted zombie-free zones, the moment where weapons of mass destruction are released as a last resort) are present in full force, but it's a decent ride all the same for those who can stomach gun violence and more than just a little blood in their shows. The story is really nothing besides an exploitative bloodbath, the junk about biological weapons causing the outbreak being window-dressing in the end, but I will give the director (Tetsuro Araki, the man who directed Guilty Crown, Death Note and ATTACK ON FREAKING TITAN) credit for keeping it interesting. Even then, the series is much more fun if you turn your brain off (metaphorically speaking) and letting the tits take you fun or fun ride.

And with that Highschool of the Dead gets an overall score of 7.50/10 cause of the entertainment value and amazing animation.

Recommended Audience: Absolutely not for children. When the show isn't exploiting with copious amounts of blood and gore, it instead turns to exploiting with clothing of wire-thin skimpiness, communal bath scenes, gluteal shots, whole minutes where one's face is trapped against a mammary, and scenes in which the entire female cast appears to be having an orgasm. The English dub, meanwhile, also contains many utterances of strong profanity.

Retrieved from "https://zcrushersstrikeforce.fandom.com/wiki/RR:Highschool_of_the_Dead?oldid=17663"
Community content is available under CC-BY-SA unless otherwise noted.