Skorr is a large dragon whose egg was discovered by Plater while searching for food to sustain the group. Skorr bonded with Lloyd Thompson, which led to the former making the latter his master.

Skorr is orange in color, with a blue underside and blue wings. His scales are especially hard and thick; the reason for this, as Jakarys described to Kotsu Reigen, was that Skorr is descended from a branch of more brutish dragons, whose purpose was serving the Emperor dragon as his bodyguards. Due to this, it is even harder to injure Skorr, almost impossible, even. Skorr has a forked tail and sharp talons, and rows of razor-sharp teeth.

Skorr is a fierce and determined fighter, eager to join the fray alongside his fellow dragons. He is quick to take action, especially when his master or his master's son are at risk. Skorr, among the dragons, is a bit of a bragger, but not to an unbearable point. Skorr also enjoys joining in the banter with the other dragons about where he has gone and what challenges he has faced. 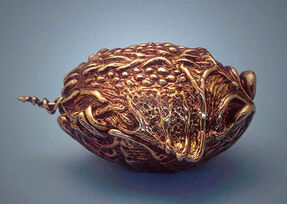 Skorr as a newborn, before his layers of protective scales grew in.
Add a photo to this gallery
Retrieved from "https://zcrushersstrikeforce.fandom.com/wiki/Skorr?oldid=18162"
Community content is available under CC-BY-SA unless otherwise noted.